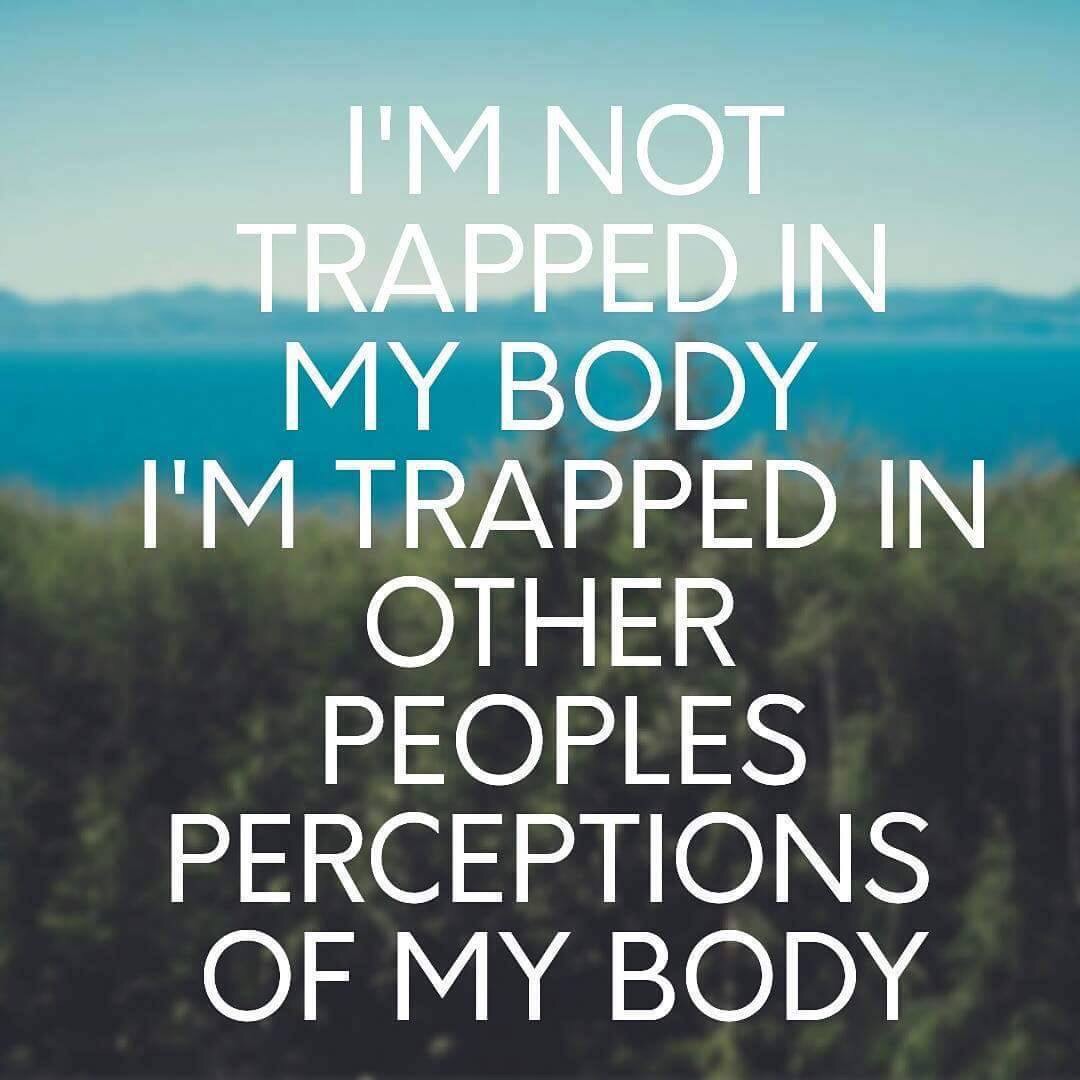 Below are a set of images with quotes and sayings which I find meaningful.

I’ve set aside a separate page for “Transquotes” – please check those out, too.

Click on them for notes about what I feel about each one.  If you have any suggestions, please let me know – I’m always looking for more!

Dysphoria sucks. Dysphoria hurts. Dysphoria is cruel and unusual punishment for a crime I didn’t commit. When it is bad, it is a weight, and it is hard to get out of bed. Hell, it’s hard to sit up in bed! Sometimes, we just need to be reminded that we are valid and accepted. If you know someone suffering dysphoria, just love them and let them know they are loved.

LOL! This is so true! I’ve not been able to tell my gender for months now (except for one day – I’m not even sure how that happened!). All the things I used to look to as markers have stopped working for me. So I’ve just had to learn to be ok with that. I think it’s actually a good thing – I think I could feel gender before because the one side felt to foreign that I could identify it. And since then, I’ve been able to integrate that gender into my self, which means that it no longer feels foreign, but is a part of me. Is this how you cisgender people feel? If so, you’re so lucky!!!

I think it’s actually both. As I’m allowing myself to become closer to my true self, I have a feeling that I am becoming a better person. At least, I’m becoming a more complete person, and that’s better, right?

Powerful words! This shows some of the juxtaposition of living with both female and male traits. Gendered words can sometimes grate, even if they aren’t meant to. And there is a constant pressure to conform to the boxes that are expected, even when what I’m feeling won’t fit into any box. 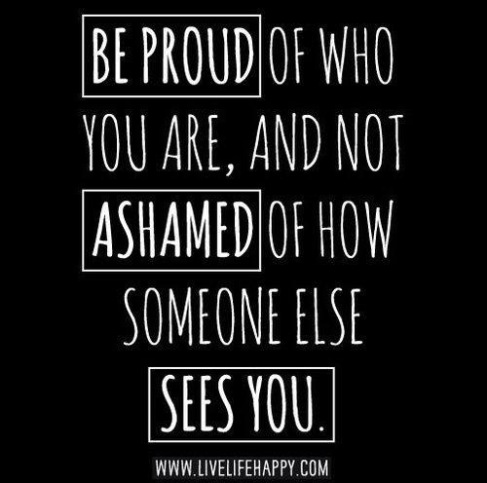 I’m working on it…

Not that who I’ve been has been false, but it hasn’t been complete. There are times I feel like I’m pretending to be cisgender – behaving in stereotypical ways just because it’s expected of my assigned gender. It’s a survival mechanism. 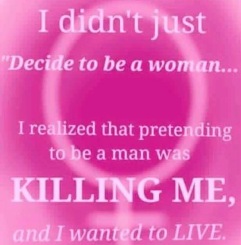 This is kind of what happened to me when I had my realization. I knew something was wrong, and I knew that if I didn’t deal with it, it would kill me. So I decided that I want to live, and that to do so, I will address my gender and deal with it instead of suppressing and repressing it.

Many of the quotes in here resonate with me. See my post about the 5 stages of grief for more.

I’m not sure if it’s the deepest pain (dysphoria hurts pretty badly!), but I can say that I became so used to this pain that I used to be able to mostly ignore it. But that was the problem – it kept building and building, until it reached a point where I could no longer ignore it, and has upended just about every aspect of my life.

LOL! With the current political climate, this struck me as funny!
Posted February 3, 2017: 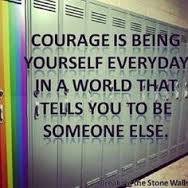 Again, is it courage if you don’t have any choice? 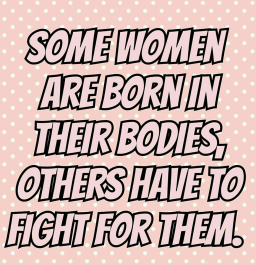 This is true for both men and women (and all other flavors).

Trust me, I’ve tried changing myself enough. If I can’t do it, you certainly can’t. 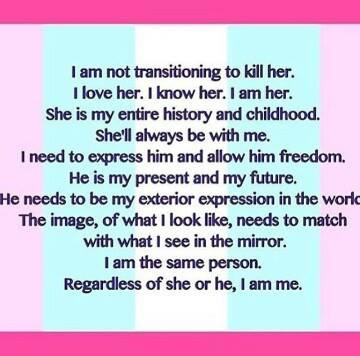 Wow! This is so powerful. For me, it’s not that I’m getting rid of my assigned-at-birth gender, but that I’m integrating the gender I feel I actually am. But on the outside, it may well appear that the old “me” is dying/going away. The underlying truth of this is that I need to be myself. I don’t hate who I was – I’m still that person. But that person was incomplete; I’m becoming a more complete me as I’m making my way through my journey.

I like this because it points out the lack of choice on gender. It acknowledges that it is self actualization that drives gender-non-conforming people to make changes to their lives.

This is so true! A common response when someone discovers I’m gender non-confirming is to point out that I “never gave any signs”. Well, actually, I gave off plenty of signs, you just didn’t know how to recognize them. To be fair, I didn’t recognize them either, so don’t feel too bad.

Looking in the mirror is s tricky thing for me. Sometimes it’s no big deal, and others, it makes me want to cry. For me, part of how I experience dysphoria is that looking in the mirror can mean that I am (painfully) reminded of how my body actually is, instead of the way my mind feels it should be. The text is also meaningful, because my spouse and I have long maintained that God only gives us what we can handle. So it follows that I was given these feelings because I (and we) are strong enough to find our way through this. 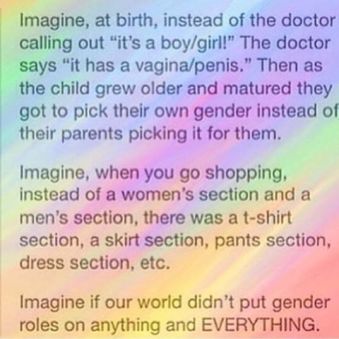 What a world that would be!

Another of the same quote. But it’s so true, it’s worth repeating.

This is another one that’s true both ways (masculine and feminine). I’m still working on loving myself.

How powerful! “I know the truth.” I’m trying to reach the point where I can not care about fitting in.

Is it courage if you don’t have a choice in the matter?

I have to return to this one regularly. I sometimes feel so selfish, guilty and ashamed to be on my journey. I feel like I am burdening my loved ones with my condition. My spouse reminds me regularly that I’m doing the things I *need* to do, and that is what I should be doing.

I can definitely identify with this sentiment. I spent so much energy making my gender non-conformity “not exist” that I couldn’t think about long term goals/plans. I had enough on my hands to just get to tomorrow, next week, next month, etc. Life became a series of “what’s the next thing I have to look forward to, and how do I get there?” I’ve never given more than a cursory thought about what life might be like 10, 20, 30 years from now.

How true! Gender expectations told me that I couldn’t be the way I felt, and I learned that lesson so well that I spent most of my life shutting off my true self. This has contributed greatly to my depression, and now that I’m working to accept my true self (and to hell with gender expectations), I am getting happier.

There are similar quotes, but it’s worth repeating. And this applies for all genders.

Since I’ve taken steps to affirm my true self, I’ve been surprised at how much more at home I feel (at times) in my own body. I took a leap of faith, and I’ve been so fortunate that my friends and family have become the wind beneath my wings (cue sappy Bette Midler soundtrack). 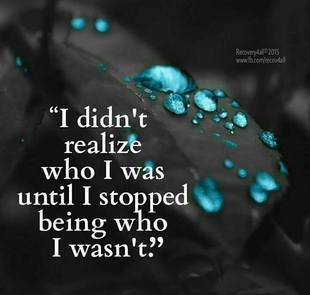 This one comes up frequently. It’s so true.

This is so true. The notion that “I’m a man/woman trapped in the body of a woman/man” doesn’t ring true to my experience. I’ve not experienced feeling like I’m (only) the gender opposite the one I was assigned. For me, it’s a feeling of “I’m more than just a man/woman – I’m both, and I’m neither”, and that’s OK. 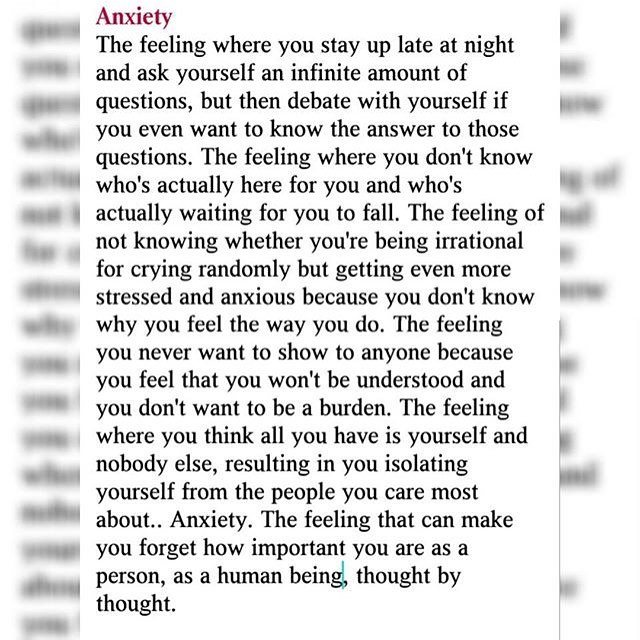 I’ve been fortunate that anxiety hasn’t been a major issue for me, but I’ve had my struggles with it. This image really spoke to me during one of those bouts. I save it to remind myself that this is a condition – that it is temporary, that I can get through it and get better.