These are a bit unique, since for many of these, there is an ongoing story still being told, so I have a section of serial comics and a separate one for standalone.

There is so much amazing work going on in this area right now.  I considered subcategorizing these into those which deal with trans women (MtF) or trans men (FtM), but quickly realized that too many of these defy those (or any) categories (which is just awesome!)

Assigned Male, by Sophie Labelle.  This one centers around a girl named Stephie, who is not afraid to say what she’s thinking.  Here are some of my favorites.

Rain, by Jocelyn C.D.  About a girl named Rain, who moved to a new high school and transitioned at the same time.

Translucid, by Tresenella.  About a woman named Sarah, who is an introverted (go team Introverts!) trans woman.  Tresenella uses a lot of her own experiences to inform the comic, so it tends to point out funny, embarassing, or unique aspects of being trans. Here are some of my favorites.

Up and Out, by Julia Kaye.  This comic started out like many – pointing out funny or ironic things, but as the author began her transition, she has included many of her own experiences in the comic.  Some of my favorites.

Transgirl Next Door, by Kylie Summer Wu.  These are mostly standalone comics, but are again, taken from her own experiences.  Some favorites.

Life of Bria, by Sabrina Symington.  Sometimes pulled from her own experiences, sometimes a commentary on current events, this comic always tells it like it is.  Some favorites.

Man Time, by Samuel Prowse.  A comic about the unique challenges of being FtM.

Validation, by Christian Beranek and Kelci Crawford.  Ally navigates life in as an aspiring comic artist and trans woman, finding allies in unexpected places while dealing with the challenges that life throws at her.  Some favorites.

Portside Stories, by Valerie Halla.  About Alexandra, a trans girl who live in Portside (a fictional city).  One of my favorite pages from Portside Stories is here.  She isn’t adding to Portside Stories any more, but is now publishing a new serial, Goodbye to Halos, which features a cast of queer characters.

Wow! What an example for the right way to respond to someone! I especially like the line “A girl came to me and showed me her soul…”; that is what being gender non-conforming is like – you are exposing your soul to people and asking them to accept you as you tell them you are.

I try to give attribution if I can identify the creator, so if I’ve missed one and you know who to attribute, please let me know and I’ll add that.  Click on the images for a larger view and my comments about the image.

My journey definitely doesn’t follow any cookie-cutter path of those before me. My journey has similarities, but I am unique, at the same time. 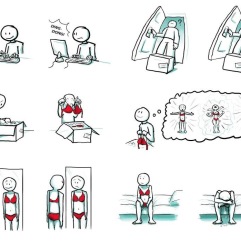 If only magic were real! If the clothes could make the man (or woman), literally! This is a good example of what dysphoria can do to you – you get an image or sense in your head of what will be right, and when you set out to make it happen, the reality doesn’t match. And that hurts.

The blue pills are estrogen, and the dad obviously doesn’t know about his child’s true gender. This is both humorous and sad – sad because the child evidently does not feel comfortable enough expressing their gender to their parent.

Hell yeah! This is similar to the dialogue in the first episode of Amazon’s Transparent series: Sarah – “Are you saying you’re going to start dressing up like a lady all of the time?” Maura – “No, honey, All my life, my whole life, I’ve been dressing up like a man. This is me.” The distinction between a crossdresser and someone who is gender non-conforming is that a crossdresser does not have a sense that they are not the gender they were assigned at birth. The act of dressing in cross-gendered clothes is not an expression of their *gender*. 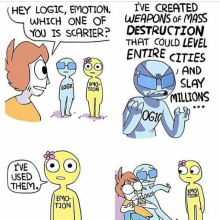 This is a great juxtaposition of the difference between logic and emotion.

How true. Children (and younger generations in general) seem to have a much easier time adjusting to the notion of gender as not something dictated by genetics, physiology and/or chemistry. When discussing whether to tell my children about my gender, my therapist encouraged me to do so as soon as possible. “The younger the kids are, the easier a time they have with it.”

I’m fortunate to have not experienced this, but so many others have. Also, take note of the use of the word “them” as a singular (there’s one baby, but the parents refer to it as “them”). The use of them/they/theirs as singular pronouns is grammatically correct and accepted (but less so when used to address someone’s sense of their own gender).

I can’t tell you how true this one is. Mirrors are not my friends. I’ve only recently been able to look in the mirror and (sometimes – very rarely) recognize myself in it.

This is humorous, but true at the same time. Dysphoria tells me how wrong my body is – how parts that I have shouldn’t be there, and parts I don’t should be there. Dysphoria hurts, and it’s hard to be happy when you have it – you’re pretty miserable. For those who are able to get their body to align with the way they feel they should be, dysphoria can be diminished, and maybe even eliminated.