So how did you do with your homework?  Was it hard?  I’ll bet if you took it seriously and didn’t make any references to the physical attributes of your body, you had to work at it. Perhaps it made you a little uncomfortable, especially if you had a hard time finding answers.

I hope you picked up on the point I was trying to make: Gender is not the same thing as Sex.  The English language can be a bit ambiguous about this, and English-speakers frequently use Sex and Gender interchangeably.  And most of the time, everyone knows exactly what the speaker is meaning when they use these words, even when they’re used incorrectly. 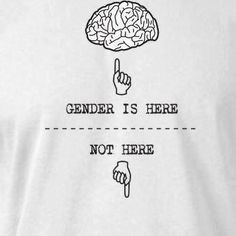 This leads to something that, on it’s face, seems benign, but is actually kind of fraught. When you go to get your driver’s license, they give you a form to fill out.  Right after name, address and phone number, what’s the next item?  Often it’s two check-boxes, one with an M next to it, the other with an F.  Pick one.  Huh? What do you mean?  Are you referring to my sex or my gender? If sex, what about someone who is intersex? If my gender, do you mean yesterday, today, or tomorrow?  This might seem silly to someone who isn’t nonbinary, but for those of us who are, this can be a sticky question.  It can have real-world consequences.  If a traveler checked F (because that’s their gender), but has a penis (because that’s their sex), and then go through airport security, the new backscatter x-ray machines they’re using might flag them because the gender on their ID doesn’t match the sex the machine detected.  Think it’s not a big problem?  Think again!

The next time you are filling out a form (paper or online) and come across that question, ask yourself which they mean.  Do they really need that information? Could they modify the form to be more aware and inclusive of intersex and nonbinary people? (Extra credit: exactly how might they modify that form to make it more inclusive?)

Oh, and my answer for my homework assignment? How do I know whether I’m a man or woman (or both, or neither)? I feel it. It’s a kind of sensation. It’s hard to describe the actual feeling except that I’ve learned to associate certain traits with the times I’m feeling feminine or masculine.  For instance, I’ve found that when I feel masculine, my emotions tend to be a bit more even (maybe even “dulled”); and when I feel feminine, they are much more intense and range a larger variety.  Colors appear more vibrant to me when I feel feminine; it’s not that I don’t see the colors when I feel masculine, they just don’t appear as intense.  So to me, my gender is a lens through which I experience the world.  Don’t you wish you had the ability to experience the world in different and new ways?

I’ll bet you’re jealous of Me right about now…