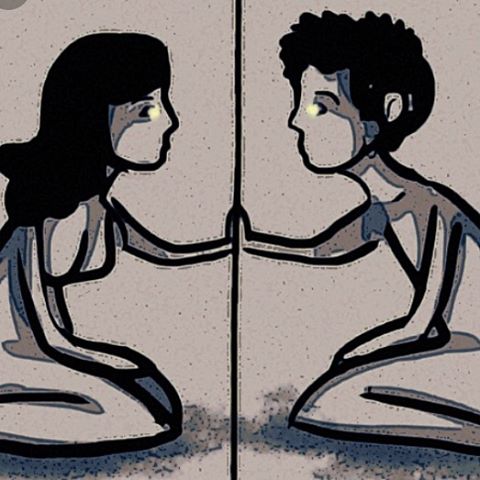 Did you find the title for today’s post a little ominous?  I’ll give you a preview – it can be one of the worst things about not being cisgender.  But first, how did you do with last week’s homework?  If you woke up in a body of the opposite sex than what you were born with, how would you feel?  Confused?  Scared? Angry?  Curious?  Would you be happy about this change?  Did you imagine how you would be treated when you went out in the world? (Would you have the courage to go out in public?) Would how you feel about your loved ones change?  Would their feelings towards you change?

Unless you fall somewhere in the trans umbrella, I’ll bet you would feel confused and scared, and it probably would take an immense amount of courage (and/or support) to venture out in public, at least to start.  Perhaps you’d feel the same feelings about your loved ones, but I’d bet they’d have some difficulty feeling the same way they’d always felt about you.

Now, imagine that you were born in that “wrong” body – that your mind always knew (at least on some level) that your gender was one thing, and your body was something different.  Do you think you’d be able to adapt to your mismatched body?  Do you think it would cause you some stress?  Do you think it might even make you feel uncomfortable within your own body?  If so, you’re getting an idea of what dysphoria is.

Dysphoria is “the dysphoria (distress) a person experiences as a result of the sex and gender they were assigned at birth.” (Wikipedia)  Not every non-cisgender person experiences it; they’re the lucky ones.  For those of us who do, it’s a four-letter-word that happens to have nine letters in it.  How a person experiences it is very personal and different from the next person. Unless I specify otherwise, the descriptions that follow are from my own experience.  If you want to learn more about other people’s experiences, I’ll provide a few links later.

So, what is dysphoria like for me? Well, first, let me confuse you more by telling you that I experience different forms of dysphoria. When I feel dysphoric, at it’s most basic, I have a strong feeling that my body doesn’t match what my brain expects it to look and feel like. I’ve described it as wearing one of those inflatable sumo wrestler suits – my body just don’t fit right, feel right or move right.  For me, this falls into two categories:

There’s another form of dysphoria which some trans people may experience: Social dysphoria.  This form stems from how others perceive and treat a trans person – whether they use the correct names, the correct pronouns, and whether their behaviors and actions affirm or deny the person’s gender.  Put more simply, if a person feels herself to be female, and hears people discussing her while using masculine pronouns (he, him, his), there’s a mismatch between the internal sense of gender (feminine) and the external validation (masculine) of that gender.  I am fortunate that, so far, I have not had much social dysphoria. 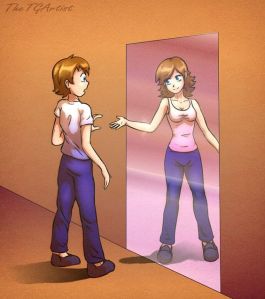 So what can I do about dysphoria?  If I had the answer to that, I’d freely share it.  I’m still looking for the answer.  I don’t know.  And I get very frustrated about that.  Through trial and error, I’ve found a few things that help some.  One is writing about my experiences and thoughts (so you’re helping me deal with dysphoria – thank you!). Another is the clothes that I wear; by wearing clothing that is strongly associated with the gender I’m feeling the need to express, it reduces the feeling that my body doesn’t match.  I avoid mirrors. My goodness, I didn’t realize how much I did this until I realized my gender identity!  Looking in a mirror – really looking – reminds me of what my body actually looks and feels like; my brain is screaming from that incongruence!  I do little things with my body which are typical of the gender I’m trying to express: how long or short I cut my hair, whether I grow or shave my body hair.  But when the dysphoria gets really bad, I curl into a ball and cry.

One thing that might not make sense to you, but nonetheless is true for me, is that I experience dysphoria as a physical pain.  For me, it is usually centered in my stomach, and feels like an ball of aching pain.When the dysphoria is relatively low in intensity, it makes me uncomfortable.  When the intensity increases, it f***ing hurts!  (Warning: this next sentence is a bit graphic) When asked to describe it, I’ve described that sensation as “someone has cut a hole in my belly, has reached inside and grabbed all my organs, and is slowly squeezing and twisting them.

Unfortunately for me, dysphoria is pretty much a constant in my life right now.  It’s always there at some level.  On good days, it’s low enough that I can almost ignore it.  But on bad days, I struggle to focus on anything but the dysphoria.  It dominates my thoughts, and makes it difficult to participate in regular life.  This is my biggest challenge with being gender non-conforming at this point – dealing with the dysphoria.  It’s a pain that isn’t eased by ibuprofen or acetaminophen (or anything else over-the-counter), nor by any other prescription pain medicine.  You could make the case that the pain is all in my head.

And so we reach your next homework question: is gender dysphoria a mental disorder?

A Day In the Life with Gender Dysphoria