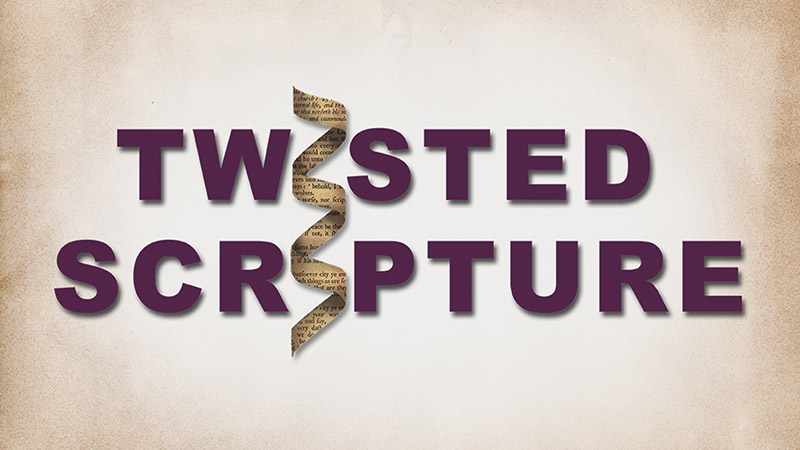 Last time, I got into a comment posted by “Max” which led off by comparing LGBTQ+ people/activism to a Cult?; this was just the first phrase of the first sentence of his comment. The remainder of his comment drew on the Bible to try to imply that simply being LGBTQ+ is sinful. I want to address his (mis)use of scripture and the flawed conclusions he arrives at. First, let’s review his comment:

“Just like a cult LGBT try and twist scripture to suit their needs. If you have the spirit of God in you, then you will want to turn from your sins. I’m not saying Christians are perfect, but I’m saying that if you love God you will want to follow his commands. ‘Do you not know that the unrighteous will not inherit the kingdom of God? Do not be deceived. Neither fornicators, nor idolaters, nor adulterers, nor homosexuals, nor sodomites, nor thieves, nor covetous, nor drunkards, nor revilers, nor extortioners will inherit the kingdom of God.’
‭‭I Corinthians‬ ‭6:9-10‬ Stop nitpicking Bible verses to justify sin. Sin is sin and God hates all sin.”

Reply to Brendan Birth’s comment on Q: What do I do if I’m transphobic and homophobic? / As a Christian believer, will God disown me if I transition from MTF? by user “Max”

Let’s set aside “try and twist scripture to suit their needs” for now. I think that it will become apparent which of us is “try[ing] and twist[ing] scripture” by the end of this post.

“If you have the spirit of God in you,” I believe in God – is that what you mean?

“then you will want to turn from your sins.” Ok, I’m following so far.

“I’m not saying Christians are perfect, but I’m saying that if you love God you will want to follow his commands.” Correct – Christians are not perfect, and have no business telling anyone else what to believe or how to behave. John 8:7 and Luke 6:37-42, you know?

Ok, here’s the meat of your argument – that in Paul’s letter to the fledgling church in Corinth, he supposedly condemns homosexuality. But does he? The word Paul uses in the original text is “malakoi” (Greek) – the plural of “malakia” (μαλακία). The Online Liddell-Scott-Jones Greek-English Lexicon offers translations of “softness“, or “of persons, moral weakness“.

In his book, The New Testament and Homosexuality, Robin Scroggs lays out a hermeneutic for understanding this passage, describing the form and function of Paul’s writing (which explains that it was customary for writers of that time to include lists – the longer the better – to add authority and weight to that person’s writing), context, and then finally approaches the definition of the word “malakoi”. He writes that malakos means “soft”, which might be extended to “effeminate”, and that by its use in other texts, pointed to the use of “call-boys”. Other Biblical scholars come away with similar conclusions – that in the time Paul wrote this letter, and in the context of the writing, malakos/malakoi refers to people with unbridled lust to the extreme – people who we today would say have problems with sexual addiction. Malakos/malakoi does not refer to the act of homosexual sexual intercourse, but to people who struggle with sexual addiction – regardless of with whom they have sexual intercourse. The “softness” of malakos refers to the softness of such a person’s ability to set and maintain sexual boundaries.

I’ll do you one better, let’s take a look at Paul’s first letter to Timothy:

for fornicators [pornois], for sodomites [arsenokoitai], for kidnappers, for liars, for perjurers, and if there is any other thing that is contrary to sound doctrine,
1 Timothy 1:10 (NKJV)

What is “arsenokoitai”? The honest answer is that we can’t be sure, as it is a word which Paul coins in this passage. While some scholars take the approach of applying the etymological roots (which would be arsēn [ἄρσην] = male, and koitē [κοίτη] = bed) and arrive at a number of answers – for example, men who bed other men, and, the marriage bed itself.

Applying a similar hermeneutic to this passage, we can infer that arsenokoitai is taking a step further than malakos/malakoi, and that it refers to what we would today call sexual abuse, and of whom we would call sexual abusers, sex offenders, or sexual predators. Again, the word doesn’t speak to homosexuality specifically, but to acts which objectify and exploit others for sexual purposes.

So what can we conclude about what these passages (as well as the other clobber verses you neglected to cite) are really trying to tell us? Well, when we take them with the larger context of surrounding passages and within the Bible as a whole, we see that what God wants for us is to enter into relationships built on covenant love – the same love as between ourselves and God. Covenant love is marked by sacredness (holiness), fidelity (faithfulness), and permanence (unending). Covenant love is not predicated on gender or sex, as demonstrated by the covenant love documented in 1 and 2 Samuel. More specifically:

Then Jonathan and David made a covenant, because he loved him as his own soul. And Jonathan took off the robe that was on him and gave it to David, with his armor, even to his sword and his bow and his belt.
1 Samuel 18:3-4 (NKJV)

Because removing your clothes and giving another man your sword doesn’t sound homosexual at all, does it?

LGBTQ+ people are as capable of covenant love as our cisgender heterosexual peers, and the Bible doesn’t actually say that homosexuality is sinful — not when you examine it with a proper hermeneutic. In fact, recent research has shown that the concept of homosexuality (as we understand it today) wasn’t present in any translations of the Bible until 1946! Prior to then, it referred specifically to pederasty – the practice of adult men having sex with young boys – the sexual addiction and sexual abuse/predation, which we covered above.

The reality is that if Jesus were walking the Earth today, he would be hanging with the marginalized of today’s society, just as he did two thousand years ago. Not because we are less holy or less worthy, but because we are more harmed by the people claiming to act in Jesus’ name.

Finally, I’ll point out that sexual orientation has absolutely nothing to do with gender identity, and that the Bible says nothing at all against a person transitioning to their experienced gender. (But I’ll bet I know which verse you’ll try to use on that one! And I’ll be perfectly happy to explain to you why that verse doesn’t say what you think it does.)

I look forward to your response,