Are you exhausted yet? I am! And I still have a ways to go before I’ve updated my name in the important places.

When I undertook the legal name change process, I realized that by doing so, I would be forced to come out at work – after all, my paycheck and my W-2 would need to match the government records. So before filing the legal paperwork, I began that process, which I’ll describe in a separate post at another time. The bottom line is, by the time the legal name change came through, I was fully out at work and was using my new name for everything except certain parts of my employee record. The process to update those was simply a matter of completing the correct form and submitting it with a copy of my court order. A day later, their records were updated. Easy! (Yay, I like those!)

This would prove to be one of the more vexing areas. While my medical providers were on-board with using my new name and pronouns, until my insurance information was updated, they needed to keep my old name in place in their files. This led to many confusing conversations where I would be called some mixture of my old name, my new name, and my old and new pronouns. Each time the old name and masculine pronouns came out, they stung – I had already moved on in my life to the new name and feminine pronouns. Thankfully, updating my Employee Record automatically updated my insurance information, and I soon received replacement insurance cards with my updated name. I proudly presented this to each provider and in turn, they each updated their systems. These days, it’s rare to hear my old name from a provider’s office, though masculine pronouns still occasionally slip through (and still sting). 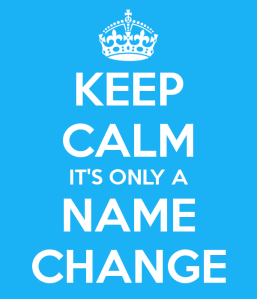 Here was another difficult area. For Frequent Flier programs, I tried contacting them through their official channels on their websites, but had no success getting a response. I ended up reaching on on Twitter, and was quickly helped by the social media teams! Score!

Hotel Loyalty Programs were a different set of beasts. I have memberships with the major chains – IHG, Marriott, Hilton, etc. Each one instructed me to submit my court order and updated ID (via email or fax) and promised to update my info within 48 hours. None of them did. I ended up having to contact customer support for each chain, and in every case, had to make multiple calls as the agents incrementally determined exactly how to make the changes. I think the fewest calls I had to make was 3 to one chain – the others were substantially more!

I’m a bit of a sucker for free stuff, and loyalty programs are often good ways to get free stuff, so I’m signed up with a lot of them! For each of them, the process has usually been logging on to their website and updating my account information. No fuss, no muss!

We are also members of AAA, and here, it was as simple as making a phone call – the agent changed my information while I was on the phone – no documentation required. He even arranged for new cards to be issued reflecting my new name.

This seems to be an ongoing process. I sent in a copy of the court order and my updated ID, and my agent updated my info. But apparently he updated it only on the master account – the individual policies still had my old name. When I discovered that, I called my agent again, and his office updated the homeowner’s policy and one vehicle. I had to call again for the other. Subsequent communications and mailings have shown that my old name still is in another place, and at some point, I’ll reach out again to have the agent hunt it down.

Updating my name on social media has been pretty simple – just going into account settings and making the change. But with social media, this change is visible to lots of other people, so I had to be aware of my timing. I’ll get into some of this in a separate post about my experience coming out socially.

The remaining places have been like a game of whack-a-mole. When I come across them, I try to handle them on-the-spot. I’ve updated my name on our utility bills, our yard service provider, Amazon and other online storefronts, phone apps, email newsletters, and a number of other places. It still comes up occasionally, but for the most part, my new name is used nearly all of the time – it is becoming more and more rare to see the old name anymore. And that feels good.

If other important places pop up, I’ll update this post or add another one. It’s taken me 9 months to get to the point that I rarely need to correct people on my name, and the process has given me a lot of sympathy for women who marry and take their husband’s last name (though I suspect they face lower bars to jump to get their names updated). But hopefully, I’ve given you something to think about – just how many different places your name is used and kept, and just how large a task it is to get it updated. I suspect it will be many years before I go a long period without seeing/hearing my old name, and it wouldn’t surprise me if it still popped up at least once each decade after that.

But it’s progress, and it’s part of a bigger picture which is slowly coming together as I rebuild myself into the New and Improved,