In this post, I’m digging deeper into one specific act from Cirque du Soleil’s Quidam (which I mention in A Nameless Passer-by) – the Aerial Contortion in Silk. This act has special meaning for me because of both the act itself and the music it is performed to. 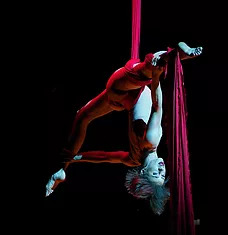 A figure, wrapped and suspended in long red silk sheets is carried high above the stage. She falls into an inverted split, which reveals a woman in a flesh-toned costume, hair in a ponytail. She seems to wake up and notice the red silks dangling from her legs. She works with them as her body contorts into impossible shapes, still suspended by the silks. She moves from pose to pose, displaying amazing strength and flexibility. As lightning flashes and thunder booms, the music changes from slow and plaintive to faster and harder – an electric guitar plays as she continues to work on the silks.

But is she in control of them, or is she losing control? She comes tumbling and twisting down, threatening to crash into the stage, but catches herself in the last moment.  She climbs the silks again, but she’s worn down – tired, disheveled, her hair has become a mess. She wraps the silks around her one last time, then tumbles over, completely spent, and slowly slips down the silks to the stage.

The song that the aerialist performs to is called “Let Me Fall”. You might be familiar with the song – Josh Groban released a cover of it a few years ago. In the live performances, the song is performed in a different language, but on the Quidam soundtrack (and Josh Groban’s cover), it is performed in English. You can play the soundtrack version below, and follow along with the lyrics beneath.

Wow! In 1999, the music spoke to me; the act spoke to me. At the time, I thought it was just the artistry, the athleticism, and the symbolism that is infused in the act (and the entire show), but upon revisiting the song more recently, I found that it has a much deeper meaning for me, especially in light of the journey I’m on.

“Let me fall, let me climb, there’s a moment when fear and dream must collide.” This is the moment of my realization of my gender. I had fallen and climbed so many times – many sleepless nights, consumed by these frightening feelings, afraid they might be real. But when those feelings came, I would tell myself “ok, that’s it – I’m going to deal with them and do what I have to.” At the time, I thought it was that I needed to accept that I was a cross dresser and that I just couldn’t eradicate that part of me. I dreamt (sometimes literally) of a time where I could be in women’s clothes and no longer afraid. My fear and dream collided!

“Someone I am is waiting for courage. The one I want – the one I will become – will catch me.” Can we say “foreshadowing”? The woman inside of me was waiting for me to build up the courage to allow her to exist. I wanted to feel whole – I needed to be whole! That woman was always there, waiting to catch me when I finally fell far enough to accept her help.

“So let me fall if I must fall; I won’t heed your warnings – I won’t hear them.” This is a request and a warning to my loved ones. I must follow my path. If my path is leading to pain and failure, I must still follow that path. You can tell me how much of a mistake I’m making, how much pain my transition is causing, but I can’t heed your warnings. It’s not that I won’t hear them, but I won’t divert from my path – I must transition.

“All I ask – all I need – let me open whichever door I might open.” What I’m asking my loved ones to do is to honor what I need – let me follow the path I’m on, regardless of what doors I must open, and possibly go through.

“Let me fall if I fall, though the phoenix may or may not rise.” Let me do what I need to do, even if it means doom for me. The imagery of the Phoenix is powerful – a bird that dies a fiery death, only to rise reborn from the very ashes of its death. To get myself where I need to be, I may have to destroy many of the things that I hold near and dear in the hopes that I can rise from their ashes. I may succeed, I may fail, but I will try.

“I will dance so freely, holding on to no one. You can hold me only if you too will fall away from all these useless fears and chains.” The image of dancing is another powerful one for me. For my whole life, I’ve been so uncomfortable with my own body that I could never learn to dance.  To me, dancing requires a level of comfort and being in touch with your body which I could never achieve. But now that my body is finally beginning to align with my gender, I’m feeling impulses to dance. I’m finally beginning to feel enough connection with my body that dancing feels possible. But I also have a strong sense that I must learn how to be me, how to dance like me. So if you want to dance with me, you need to be willing to fall with me. After all, I’m trying to set aside the years of being afraid to face who I am, and also the lessons I learned which limited my experience to male, when it should have been female; I was shackled to the male experience.

There are so many parallels to my current experience. I have experiments and failures (makeup and clothes among the biggest). I’m learning how to allow myself to be the person I really am; the only way for me to do this is to try things and fall down, then try again until I climb. I suspect that this song has a lot of meaning for a lot of people – a lot of people seem to struggle with aspects of their lives. 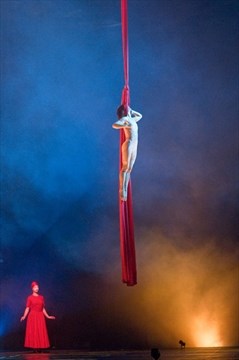 Further, I believe that early in Quidam’s run, the act ended with the artist simulating hanging herself – certainly (and very tragically) a common theme within the transgender community.

The imagery with the aerial act is also very meaningful. When the artist begins, it’s like an awakening – she’s shrouded in the silk and motionless. She appears to have herself together and in control – her hair is in a crisp ponytail, her movements are slow and intentional. As the act continues, she’s increasing the level of difficulty, testing herself. By the end, her hair is a mess and she’s flipping and careening almost out of control, only to save herself at the very last moment. My experience getting to the point where I realized I’m transgender is similar; I was basically asleep and unaware (the majority of my life so far), and began to wake up to the fact that I had something different about my gender. I started my exploration slowly and carefully. As my journey continues, I began to push further, faster, harder – I wanted to know where my limits are. I kept pushing and pushing, trying new experiences, exploring my traits and tendencies, seeing how far I could go. But instead of stabilizing, things got more wild and felt more out of control. It took a lot of work and reflection to realize the truth of what I am – I was careening through life, but once I caught myself and accepted that I’m transgender, the chaos subsided. I fell, but thankfully not to my doom. It took me a while to collect myself and recover after that realization, but I’m finally climbing again!

So does this song or this act speak to you? What does it mean for you? Please comment below or send me a message – I love hearing how Cirque moves people.

Until then, I’m invoked, provoked and evoked,

4 thoughts on “Let Me Fall”