Today is Christmas. This year, I entered the holiday season in a better place than I’ve ever been before. I’m living authentically, my body is beginning to feel like my own for the first time in my life. I’m 22 days away from having bottom surgery which will go a long ways towards helping my body be complete in the form it was supposed to be all along. I’m completely out to everyone in my life, and they have responded with love, acceptance and support.

So why do I feel so bad?

It’s complicated. Christmas has always been a mixed bag for me. Growing up, I looked forward to Christmas. I believed in Santa Claus, and I had my list of presents I wanted. But I also had an unspoken list that I couldn’t share. I hoped Santa could make me into the girl I felt myself to be. And, short of that, bring me girl toys and clothes. But I couldn’t tell anyone, and every Christmas morning, I woke up in a boy’s body. Every Christmas morning, I’d open my presents, and none of them would be for a girl. Every year, I’d enter the Christmas season secretly hoping that this would be the year, and every Christmas, those hopes would be dashed.

Somewhere around 10 years old, I stopped believing in Santa. But the hope didn’t end. Each Christmas held new promise, and I kept the same cycle of hoping and then coming away disappointed. Around 16 years old, I lost that, too. Puberty was too far along and I’d begun dissociating from my body. The reality had sunk in and I had to deal with the fact that my body was becoming increasingly distant from what it was supposed to be.

Holidays and birthdays were difficult times for me. At birthdays, my wish while I was blowing out my candles was that I’d become a girl — every birthday. Halloween was just as bad – I wanted to be myself, not any make-believe character or costume.

As an adult, Christmas remained complicated. I enjoyed giving and receiving presents, but the hope that someone would see what I really wanted and give that to me remained. In fact, one of the more memorable Christmases was a year when someone accidentally gave me a pair of panties; there were lots of jokes and I was teased about that, but for the first time, I’d actually received something affirming of how I felt on the inside. But even that was complicated – while I’d received panties, they weren’t intended for me, so I wasn’t truly being affirmed. 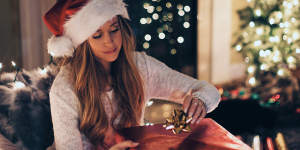 Two years ago was my first Christmas after realizing I wasn’t cisgender, but at that point, I still believed I was genderfluid. Last year was the first Christmas knowing I am a woman. I got clothes – women’s clothes – and that felt fantastic! I have no reason to believe that this year will be any different. So why do I still feel so bad?

I think part of the answer is that I’m mourning. Over 40 years of Christmases turning out to be less than I’d hoped for is a lot of momentum to overcome. I have a lot of unresolved pain in those memories (perhaps the focus of a future EMDR session?).

I’ve also noticed that I’ve been experiencing dysphoria more frequently and more intensely the past few months. I suspect it has some ties to the upcoming surgery, as it’s frequently focused around my genitals. Dysphoria is a beast to overcome – it makes sense that it would put a damper on any holiday spirit.

The dysphoria is probably made worse by the difficulties I’m having with my insurance company in getting all the required pre-authorizations squared away before I need to leave for the surgery. At this point it feels like they are dragging their feet on purpose, promising to have an answer (not necessarily an approval) about 2 business days before I’m scheduled to go under the knife. These delays have led me to delay making hard plans, such as making a reservation on a place to stay for my recovery. I’ve been working to minimize the effects of these delays, even going out on a limb to make a non-refundable deposit on a place. But the stress remains, and is almost certainly part of keeping me from enjoying the holiday.

But not all is lost: one of the aspects of Christmas I’ve always been able to remain connected to is the music, both secular and religious. It took me a little longer than usual this year, but I’ve been returning to trusted playlists to hear favorites and exploring new music as well. And a week ago, I attended a local concert where a full orchestra joined over 300 voices to perform Christmas music. I heard favorites from Handel and John Rutter, and discovered other great pieces from other composers and arrangers. Even now, as I write and wrap presents, I’m immersed in great music from The Piano Guys, Lindsey Stirling, Chloe Agnew, California Guitar Trio, Cimorelli, Charlie Byrd, Apollo’s Fire, and, of course, Trans-Siberian Orchestra!

I’m inclined to chalk this year up to a convergence of bad circumstances, but it doesn’t change my experience in the moment. The holiday season will probably remain a challenging time of year for me for the foreseeable future, but it will also remain a hopeful time. Perhaps sometime I will be able to set aside past disappointments and just enjoy the holiday for what it is, a time for family and friends to come together and celebrate each other. I hope so!