Note: I wrote this in the week following Halloween 2018.

Halloween is celebrated in the United States with children (and some teens) putting on costumes and going from door to door, asking “Trick or Treat?” and usually receiving a handful of candy in return. Adults may celebrate by donning costumes of their own and decorating their homes with a variety of creepy and scary items. 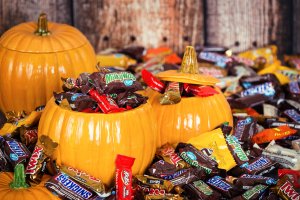 Growing up, Halloween wasn’t as big a deal to me as it seemed to be for the other kids. Weeks in advance, they would be in heavy discussions of their costumes, making plans for getting together and for which houses and neighborhoods to visit. While I enjoyed the candy (more than was really healthy for me), I didn’t really enjoy the rest. While the boys were detailing their plans for transforming into He-Man or a Teenage Ninja Mutant Turtle and the girls were discussing becoming fairies or princesses, I was left inbetween the two – wanting to fit in with the boys but unable to speak their language, and wanting to be the things the girls were talking about, and unable to really be a part of either group. So I didn’t plan anything, and if I were to dress up in a costume, it would either be a hand-me-down from one of my siblings, or something contrived at the last moment in order to be minimally qualified to go out and beg for candy.

As an adult, my separation from Halloween continued. As friends held costume parties or went to clubs to celebrate Halloween, my inability to enjoy being in a costume remained. My introversion further exacerbated the issue – being in social gatherings were draining, and having the pressure of a costume was draining – so I just avoided it altogether. The times I let my mind wander about costumes, it would inevitably go to feminine costumes – female superheroes and stereotypical costumes like a cat (in tights and a leotard) or fairy (silky sheer skirts). But those were impossible; my large build would make being convincing in those costumes impossible.

More recently, I’ve come to understand more of why I couldn’t get into Halloween. You see, Halloween costumes are about becoming something you aren’t – just for a night. I spent my entire year wearing a costume – that of a man – why would I want to continue that charade? For me, if Halloween meant that I could spend a night as myself – my true self – you now had my attention. But that was never meant to be. Dressing up as a woman or in feminine costumes wouldn’t work, because I’d still be in costume; I wouldn’t be the woman I felt myself to be inside. I wouldn’t be presenting as my true self!

Other holidays have been difficult for me as well (I’ll get into that in a different post), but Halloween had a special kind of difficulty, as it was the one night that it would be socially acceptable for me to dress in the clothes I desperately wanted to wear all the time. Yet I couldn’t get into the spirit, because something else was missing. It wasn’t enough to dress like a woman, I needed to be the woman.

Last year (2017) was my first Halloween since starting HRT and beginning to live as a woman full-time. Going into the evening my feelings about Halloween were about the same as before. I hadn’t made any plans for a costume, and as the evening approached, I ended up putting on a witch’s hat we had from a prior Halloween and handed out candy in our driveway. One of the higher points of the evening was one boy, dressed as a knight, who addressed me as “m’lady” – that felt really good, as at that point, I had only recently gotten my hormone levels within my target ranges, and was still in the awkward androgynous phase. 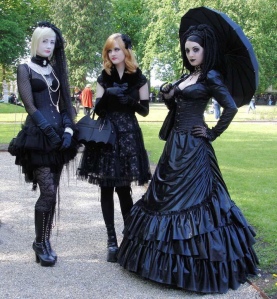 This year, I wasn’t giving Halloween much thought until a few weeks before, when my daughter and I visited a nail salon for a daddy-daughter mani/pedi date. When selecting the color for my fingers, on a whim, I decided to go with black, figuring “it’s the right time of year for black nails”. While the tech was doing my fingers, my daughter and I were chit-chatting about her plans for Halloween, and I had a thought – I’ll go goth for Halloween this year! I began looking over possible costume elements – fishnets, dresses, sleeves, makeup, accessories. The more I looked, the more excited I was becoming. I selected a few things and ordered them, then visited the local Sephora for makeup. I got some pale foundation (samples, of course), and some lip gloss and matching eye-liner/shadow. I tried on the dress, and was surprised when I looked in the mirror – I might actually be able to pull this off!

Halloween night, I took a shower and began to work on my hair and makeup. Unfortunately, I was so hot and sweaty that nothing was working, and I had to walk away and cool off. When I returned, I was able to get my makeup on and looking decent, so I went and put on the clothes and accessories. I presented myself to my wife who laughed and took a few pictures. I didn’t have anywhere to go, so we sat and watched TV, while trick-or-treaters occasionally rang our doorbell.

One thought on “Trick, or treat?”